On Wednesday, President Barack Obama outlined his package of proposals to “reduce gun violence” in the United States. The key issues the White House is seeking to introduce are: universal background checks for all gun sales, the reinstatement of a ban on assault rifles ban and a 10-round limit on magazines.

One of the proposals includes gun trafficking law that would make the act a federal crime.

After the press conference, surrounded by children, the president signed 23 executive orders.

So, we kick off another national gun debate. But what do gun laws look like south of our border? Is it surprising to hear that it’s far more difficult to legally purchase a gun in Mexico than the U.S.?

Here are some interesting facts:

• Like the United States, the Mexican constitution guarantees the right to bear arms.

• Up until the 1960s, firearms were widely available, but student unrest in those years inspired a crackdown and a strengthening of gun control laws.

• There is now only one legal gun store in Mexico — in Mexico City — and buyers must wait months for approval of purchase from the Ministry of Defense.

• Purchases are limited to small caliber, non-military weapons, including hunting rifles, that must be kept at home; semi-automatic weapons are only sold to military and police.

• There is robust illegal trafficking in firearms from the U.S. to Mexico. Many accounts have it that up to 90 percent of illegal guns in Mexico are from the U.S., but that figure is widely disputed as it comes from confiscated firearms turned over by the Mexicans to U.S. authorities.

• The Mexico and U.S. are closely interlinked when it comes to gun control laws. A recent paper contends the 2004 U.S. Federal Assault Weapons Ban had a “measurable” impact on the rates of violence in Northern Mexico.

John Rosman
John Rosman is the digital editor for KPBS News. He oversees all news content on KPBS.org and across all digital properties. Prior, John was the social media editor for Fronteras Desk. Before heading south, John was a digital producer for Oregon Public Broadcasting. There he led the flagship radio program Think Out Loud in all aspects of digital media. Working with OPB's cultural website, Arts & Life, he also produced multimedia features. By way of metro Detroit, John is a proud graduate of the University of Oregon's School of Journalism. He has worked as an editor in television and film. But he found his passion for public radio during a long winter, in a lonely hotdog stand. When John's away from the office, you can find him catching up on all the sun he missed in Oregon.
See stories by John Rosman 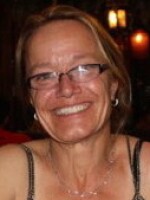 Alisa Barba
Alisa Joyce Barba is an award-winning journalist, producer, writer and editor with 25 years experience in both network and public broadcasting. For 12 years, she served as the Western Bureau Chief for National Public Radio. She was responsible for the editorial content and production of member station reporter and staff pieces for air on NPR's All Things Considered and Morning Edition. While monitoring news in the western US, she specialized in covering border and immigration issues and won numerous awards for editing series and stories on a issues ranging from the failed "war on drugs," western water policies, and border corruption. Independent of NPR, she won the coveted Dupont Award for her work as Executive Producer of the 2001-2002 Documentary "Culture of Hate: Who Are We?". In 1997 she won the Jerry Schumacher Award for Best Program about Health Care Issues: Under the Knife: San Diego Medicine Confronts the Bottom Line. Prior to her work with NPR, Alisa was a Producer for ABC News in Beijing, covering, among other stories, the Tiananmen Square uprising. From 1989-1995 Alisa was a Producer/Reporter for MacNeil-Lehrer Newshour in New York and Washington DC. Based in San Diego, her journalism work has focused heavily on immigration, military and health care concerns. She holds a Masters Degree in Chinese History from UCSD and a BA from Middlebury College.
See stories by Alisa Barba
Sign up for our newsletters!
Keep up with all the latest news, arts and culture, and TV highlights from KPBS.
LATEST IN PODCASTS
LATEST IN EVENTS
LATEST IN TV HIGHLIGHTS
Election 2022: Live results
Explore all national, state and local returns now.
See results →
More News