It's been a hot summer. Here's how people around the world have been staying cool

This is an excerpt of a newsletter we're trying out from the Rough Translation team. Sign up for stories from around the world spotlighting new trends and perspectives in global culture.

Heat waves may mark the end of the necktie. It's been a long time coming. Fashion critics have been forecasting the demise of the necktie for decades. Then, the pandemic didn't make it any easier for the classic suit-and-tie style. Now the once-mighty emblem of the white-collar job has suffered an international setback. It came in the form of a bold new mandate by Spain's Prime Minister Pedro Sánchez, who is trying to get his country to ditch its neckwear.

The announcement came on a sweltering day late in July, as a historic heat wave engulfed much of Western Europe. Proudly displaying his own open collar, Sánchez told government ministers to leave their ties at home, and he asked Spanish business leaders to apply the same edict in their companies.

"This means we can all save energy," he explained.

Spaniards have been blasting the A/C. Sánchez wants them to look for other ways to chill.

The Spanish government is responding to sudden cuts in gas shipments from Russia by setting limits on air conditioning and lowering energy consumption. Businesses are being asked to keep the temperature at a tropical 80 degrees Fahrenheit, a tough sell when it's 95 degrees outside, even in regions that rarely experience that kind of heat. Nixing the necktie is Sánchez's way of making the ask a bit more refreshing.

Spain is not the only country in need of a respite. Extreme heat is increasingly common throughout the globe. From Shanghai to Texas, summer hit us with a newfound vengeance. As more people search for a break from the sun, we look at ways to keep cool all over the world.

ShadeMap is a handy, playful tool for tracking shadows across buildings or the local natural terrain in different countries. Summer travelers can use it to plan the perfect shade break across the globe.

Salvatore Basile's Cool: How Air Conditioning Changed Everything is a deep dive into the surprising history of artificial cooling. Initially developed and adopted widely in the United States, A/C is on the rise in countries throughout Asia and the world. Basile is a keen observer of the change in attitudes toward "machine-made cold." Often viewed as a frivolous luxury early on in the 20th century, it is now understood to be a lifesaver when temperatures exceed the capacity of the human body to cool itself.

A/C is far from being a perfect solution. Refrigerants used in many units exacerbate climate change, adding an ironic twist to an appliance with a big role to play in a warming planet.

From grass curtains hung over doors to swamp coolers, there are alternatives to air conditioning. Dr. Gulrez Shah Azhar's "Life hacks from India on how to stay cool" is a primer on beating the heat without having to turn on a unit. This piece from NPR's Goats and Soda blog is based on the wisdom of someone who is well acquainted with high temperatures.

Nothing beats the hot weather like an ice-cold treat. Folu Akinkuotu's Unsnackable newsletter is a delightful guide for global snacks. From the combination of iced coffee and lemonade slush sold in Japanese Starbucks to medieval-themed ice cream from Estonia, flipping through past volumes of the newsletter takes the reader into a brave new world of tastes and flavors. Check out Folu's story in this Rough Translation episode.

Sign up to get the latest trends and recommendations in global culture: 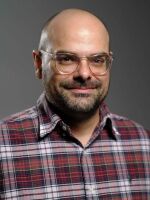 Luis Trelles
Luis Trelles is a senior editor on NPR's Enterprise Storytelling Unit, where he helps shape international stories that hit close to home for the Rough Translation podcast.
Sign up for our newsletters!
Keep up with all the latest news, arts and culture, and TV highlights from KPBS.
LATEST IN PODCASTS
LATEST IN EVENTS
LATEST IN TV HIGHLIGHTS
Get ready to vote
What questions do you have about the Statewide General Election coming up on Nov. 8? Submit your questions here, and we'll try to answer them in our reporting.
Launch →
More News