What does evil look like? Just ask Frank Meeink, who became a skinhead at age 13, and spent years struggling with the demons inside him—the ones that caused him to pick fights for no reason, sometimes beating his victims senseless. It took incarceration to help him turn his life around.

In town recently for the kick-off of a new art exhibit, “Speaking Volumes: Transforming Hate,” I was awestruck at Meeink's ability to enthrall hundreds of students at Kearny High School with his stories of hate, intolerance and redemption.

Frank Meeink explained how his personal childhood experiences led him to become a member of the neo-Nazi movement, and how, as a child, his daily goal was to be hit by a car, just so that he wouldn’t have to go home to suffer the abuse of his step father. He also recalls his shame in having to flash brightly colored food stamps at the corner deli, and the torment he endured at the predominantly African American high school he attended in Philadelphia.

When he was 14, Meeink met some skinheads, who immediately became fascinated by his “inner city” life. They’d ask him questions about high school, and other things that to him, seemed so basic, like, “What’s it like using public transit?” No one had ever shown interest in Meeink as a child, so in his adolescent mind, these skinheads were asking him about his life, which meant the world to him.

Listen to public radio’s candid interview with Meeink. It provides an insightful glimpse into Meeink's life of hatred and reconciliation.

Meeink decided to shave his head and wear steel-toed boots. By 16, he enjoyed garnering attention for behaving badly. On a path toward self-destruction, he amassed arrest warrants and drank heavily. He ended up in a mental ward only to escape a few days later. Soon after, Meeink began recruiting high school students to become neo-Nazis and even hosted a local television show, “The Reich,” to recruit even more people into the movement. Eventually, he found himself serving time in the same Supermax prison as the serial killer and rapist, John Wayne Gaycee.

While in prison, Meeink played football with inmates of all races, which led him to begin questioning the hatred instilled in him by the movement. Beyond the cell walls, the infamous O.J. Simpson trial was permeating the press, and for the first time, Meeink heard about the science of DNA. In the end, it was a mixture of religion and science that inspired Frank Meeink to change.

As his story concludes, he beams with pride, telling the students about his non-profit organization, Harmony through Hockey, a youth hockey violence prevention program that teaches students to work as a team.

“In hockey, you can’t see the skin color behind the helmet," says Meeink. "All of them have to learn, it’s a team sport."

The Anti-Defamation League, which organized Frank Meeink’s visit to Kearny High school, works to stop the defamation of the Jewish people, and secure justice and fair treatment to all people. This year marks the ADL’s 100th anniversary. The local chapter is celebrating with this unusual exhibit comprised of captivating pieces produced by artists from across the nation, who were invited to reflect upon, or transform, thousands of volumes of white supremacist propaganda into a contemporary art exhibit. Speaking Volumes: Transforming Hate will be on display at the Lawrence Family Jewish Center, now through June 6. 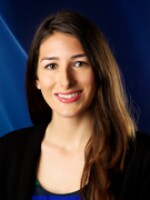 Ashley Rodriguez
Ashley Rodriguez is a coordinator in KPBS’ Diversity, Community Engagement and Grants department, tasked with building relationships with diverse communities and leaders in San Diego. In collaboration with community organizations, schools, and other public media stations, Ashley coordinates events tied to KPBS and PBS programs such as Not In Our Town and Freedom Riders. She also coordinates engagement activities for the multi-station collaborative Fronteras: The Changing America Desk. Ashley began working at KPBS as a part-time assistant while attending San Diego State University. In 2011, Ashley was awarded the Susan and Stephen L. Weber Education and Community Engagement Fellow and graduated from San Diego State University with a degree in international security and conflict resolution.
See stories by Ashley Rodriguez

Monica Medina
Monica Medina served as director of community development and engagement, where she was charged with donor cultivation in San Diego's diverse communities and grant oversight. In that role, she also oversaw major outreach initiatives, including One Book, One San Diego, which, in 2016, celebrated 10 years of promoting literacy in San Diego, Imperial Valley and Tijuana. Other activities include: the national outreach effort for "Splash & Bubbles," a PBS children’s learning series about oceans and rivers from the Jim Henson Company; Community Heroes, an initiative in partnership with the National Conflict Resolution Center, honoring individuals who give selflessly to build civility and community in San Diego; and KPBS Kids Workshops, which is implemented in partnership with the San Diego Children’s Discovery Museum in Escondido. Monica, who was once honored with the prestigious National Center for Media Engagement, Outreach Professional of the Year Award, has a B.A. from Brandeis University and an M.A. in journalism from the University of Maryland.
Sign up for our newsletters!
Keep up with all the latest news, arts and culture, and TV highlights from KPBS.
LATEST IN PODCASTS
LATEST IN EVENTS
LATEST IN TV HIGHLIGHTS
Get ready to vote
What questions do you have about the Statewide General Election coming up on Nov. 8? Submit your questions here, and we'll try to answer them in our reporting.
Launch →
More News