Spaghetti and meatballs pretty much sum up the American take on southern Italian food. But the southern Italian island of Sicily is home to a cuisine that spans far beyond what we've come to know as the Italian staples.

So while visitors may be drawn to Sicily for its Greek and Roman ruins, the island is also a gastronomic destination, boasting a cuisine that is both surprisingly diverse and delicious.

In the classic Sicilian dish pasta con le sarde, the mix of pasta, fresh sardines, pine nuts, currants, saffron and fennel is a drastic departure from the heavy tomato sauces of Italian-American cuisine — and that's only the beginning.

Pasta con le sarde's rich mix of ingredients is characteristic of Sicilian cuisine and stems from the cultural influences of Sicily's conquerors. Since the ancient Greeks, the island of Sicily has been inhabited by many great civilizations. The Phoenicians, Romans, Arabs, Normans, Spanish and French all added a little something to a native Mediterranean diet that was already a few thousand years ahead of its time.

Under the hot Sicilian sun, grapes, fava beans, artichokes, leeks, tomatoes and loads of oranges and lemons thrive through the long growing season. Capers the size of olives grow out of cracks in ancient amphitheaters, and Greek ruins are overgrown with wild fennel.

Apart from the ruins, the Greeks also contributed their love of fish, helping to make tuna and swordfish long-standing staples on an island bordered by three seas. Contemporary Sicilian menus offer dishes like pasta with dried tuna roe, mint and tiny strawberries or a sauce of cuttlefish and pistachios; squid stuffed with fava beans; and fried mackerel with sesame crust.

But the Arabs, who arrived in the 9th century, left the deepest culinary imprint. Their greatest contribution was the gift of eggplant, which is now part of a stunning number of Sicilian dishes. Eggplants are fried, braised, stuffed and even mixed into delicious Sicilian caponata, a sweet-and-sour eggplant dish made with celery, olives, capers and tomato sauce.

Before the Arabs came, honey was the sweetener of choice — but since they brought sugarcane to the island, Sicilians have never looked back. The island now offers a dizzying array of tooth-achingly sweet cakes and cookies. Pastry shop windows are loaded with life-like marzipan fruits and vegetables, cannoli, and cookies with pine nuts, sesame seeds and pistachios.

And while many of these sweets are made in convents and monasteries, they still carry irreverent names — like the pistachio buns called "chancellor's buttocks," tarts named "virgin's breasts" or the elaborate cake called "triumph of gluttony."

And if cheeky desserts aren't your style, you can always opt for gelato in brioche, which is so good it can even pass for breakfast.

All the while, Sicily's rich banquet has coexisted with an abject poverty so bad that, at the end of the 19th century, it drove millions of southern Italians — many from Sicily — to emigrate to America. Without familiar ingredients from home, they improvised and created an Italian-American cuisine that adds one more nation to Sicily's rich stewpot of flavors. 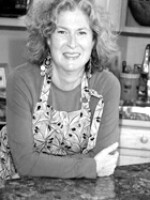 Bonny Wolf
NPR commentator Bonny Wolf grew up in Minnesota and has worked as a reporter and editor at newspapers in New Jersey and Texas. She taught journalism at Texas A&M University where she encouraged her student, Lyle Lovett, to give up music and get a real job. Wolf gives better advice about cooking and eating, and contributes her monthly food essay to NPR's award-winning Weekend Edition Sunday. She is also a contributing editor to "Kitchen Window," NPR's Web-only, weekly food column.
Sign up for our newsletters!
Keep up with all the latest news, arts and culture, and TV highlights from KPBS.
LATEST IN PODCASTS
LATEST IN EVENTS
LATEST IN TV HIGHLIGHTS
Get ready to vote
What questions do you have about the Statewide General Election coming up on Nov. 8? Submit your questions here, and we'll try to answer them in our reporting.
Launch →
More News