Sam Bankman-Fried, the notorious former CEO of crypto exchange FTX, is facing a raft of federal fraud charges, accused of misleading investors and using billions of dollars from his customers for his own ends. He was arrested in the Bahamas, where he lives, the office of the attorney general of the Bahamassaid on Monday night.

The U.S. attorney's office in southern New York filed the federal charges against Bankman-Fried, who's also known as "SBF," on Friday under a sealed indictment, according to court records. A magistrate judge unsealed the indictment the morning after Bankman-Fried's arrest.

In a statement sent to NPR, Bankman-Fried's attorney, Mark S. Cohen, said his client is "reviewing the charges with his legal team and considering all of his legal options."

Bankman-Fried is charged with "a series of interrelated fraud schemes," U.S. Attorney for the Southern District of New York Damian Williams said at a news conference about the case Tuesday.

Williams also raised the possibility that more charges could be yet to come, as agencies and investigators comb through financial records.

"This investigation is very much ongoing and it is moving very quickly," he said. "But I also want to be clear about something else: While this is our first public announcement, it will not be our last."

Describing the campaign finance charge, Williams said Bankman-Fried directed tens of millions of dollars to be illegally sent to Democratic and Republican candidates and committees — money the prosecutor said was stolen from customers.

"All of this dirty money was used in service of Bankman-Fried's desire to buy bipartisan influence" and shape policy, Williams said. Directing part of his comments to any political campaign, entity or person that received stolen money, he added, "We ask that you work with us to return that money to the innocent victims."

FTX goes from a behemoth to bankruptcy

The arrest and charges complete what has been a stark reversal for Bankman-Fried, 30, who had watched FTX's value soar to some $32 billion after launching the company in May 2019. Earlier this year, FTX's splashy public relations blitz included a Super Bowl ad and high-profile celebrity endorsements, touting itself as "the safest and easiest way to buy and sell crypto."

But FTX abruptly filed for bankruptcy last month, under a cloud of suspicions about its solvency. Questions centered on $8 billion in customer deposits that was unaccounted for.

Now authorities are saying Bankman-Fried's promise of using sophisticated measures to protect FTX customers from risk was part of a long-running fraud. On Tuesday, authorities repeatedly called his crypto operation a house of cards.

The campaign finance charge accuses Bankman-Fried and others of conspiring to circumvent federal limits on campaign donations and making "corporate contributions to candidates and committees ... that were reported in the name of another person."

Along with the criminal charges, civil complaints against Bankman-Fried were announced by the Commodity Futures Trading Commission and the Securities and Exchange Commission.

Gurbir Grewal, the SEC's head of enforcement, said FTX hid its actions behind a "veneer of legitimacy" that was in fact fraudulent.

Bankman-Fried is accused of misleading investors

Despite what he told investors, Bankman-Fried "had exempted Alameda," his privately held hedge fund, from risk mitigation measures, the SEC says in its complaint, "and had provided Alameda with significant special treatment on the FTX platform, including a virtually unlimited 'line of credit' funded by the platform's customers."

That line of credit was sustained through an order from Bankman-Fried to alter FTX's underlying code so Alameda could access funds, the CFTC says. The agency says Alameda also benefited from preferential treatment, such as faster execution times for FTX transactions and "an exemption from the platform's distinctive auto-liquidation risk management process."

When "Bankman-Fried's house of cards began to crumble" in May 2022, the SEC complaint states, he "directed FTX to divert billions more in customer assets to Alameda to ensure that Alameda maintained its lending relationships, and that money could continue to flow in from lenders and other investors."

Those actions allegedly continued through the summer, as Bankman-Fried "continued to make misleading statements to investors about FTX's financial condition and risk management," according to the SEC.

The agency says Bankman-Fried "used Alameda as his personal piggy bank" — an accusation that's very different from the public persona he sought to project.

Bankman-Fried "held himself out as a visionary leader in the crypto industry, and touted his efforts to create a regulated and thriving crypto asset market," burnishing an image built on responsibility and trust, the SEC says.

Summarizing the charges, SEC Chair Gary Gensler said, "We allege that Sam Bankman-Fried built a house of cards on a foundation of deception while telling investors that it was one of the safest buildings in crypto."

Bankman-Fried was taken into custody in the Bahamas

The crypto executive's arrest in the Bahamas was made at the request of the U.S. government.

The Bahamian attorney general said police made the arrest after officials received "formal notification from the United States that it ... has filed criminal charges against" Bankman-Fried, and they learned that the U.S. is "likely to request his extradition."

The office "intends to process" an extradition request "promptly," when it is made.

In a statement, the prime minister of the Bahamas stressed that the country is cooperating with law enforcement and regulators in the United States, but its own "regulatory and criminal investigations into the collapse of FTX continue."

Bankman-Fried was poised to testify to lawmakers

Just one month ago, FTX, a behemoth in virtual currencies, filed for bankruptcy after suspicions rose that it was insolvent and also moving money around illegally.

Bankman-Fried resigned hours before the bankruptcy filing and has spent the last month on a charm campaign, painting himself in a variety of media interviews and even on Twitter Spaces as a guy who let things slide and didn't intentionally commit fraud.

He was slated to testify virtually from the Bahamas before a congressional committee on Tuesday.

As of late Monday night, the committee still had a notice of the hearing posted that listed Bankman-Fried as a witness and also included the written testimony of the hearing's other witness, FTX's CEO John Ray.

Bankman-Fried has denied that he has avoided coming to the United States over the last month for fear of being arrested. 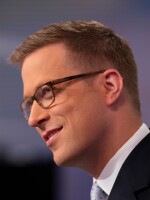 David Gura
Based in New York, David Gura is a correspondent on NPR's business desk. His stories are broadcast on NPR's newsmagazines, All Things Considered, Morning Edition and Weekend Edition, and he regularly guest hosts 1A, a co-production of NPR and WAMU.
Bill Chappell
Bill Chappell is a writer, reporter and editor, and a leader on NPR's flagship digital news team. He has frequently contributed to NPR's audio and social media platforms, including hosting dozens of live shows online.
Sign up for our newsletters!
Keep up with all the latest news, arts and culture, and TV highlights from KPBS.
LATEST IN PODCASTS
LATEST IN EVENTS
LATEST IN TV HIGHLIGHTS
More News