President Biden awarded 14 individuals with the Presidential Citizens Medal on Friday afternoon for their work protecting the U.S. Capitol during the Jan. 6 insurrection and for overseeing the 2020 election process despite efforts to overturn the results.

The medal recipients were both public safety officers who were on duty during the riot as well as state and local election officials.

"For the first time in my presidency, I'm bestowing the Presidential Citizens Medal, one of our nation's highest civilian honors. It recognizes, 'citizens of the United States of America who have performed exemplary deeds of service for their country, or their fellow citizens,' " Biden said during the ceremony at the White House.

The anniversary comes just weeks after the House committee investigating the attack concluded its investigation and released its full report.

Award recipients include members of the Capitol Police and the Metropolitan Police Department, as well as three officers who diedin the days following the insurrection.

State and local election officials are also being honored for their work pushing back against attempts to overturn the presidential election results. Many were the subject of intense harassment from far-right factions engaged with election-denying conspiracy theories.

Many medal recipients testified publicly during the series of live hearings held by the committee over the last year.

"It's not exaggeration to say America owes you, owes you all — I really mean this — a debt, a debt of gratitude," Biden said, "one we can never fully repay unless we live up to what you did."

Here are those who were honored

Brian Sicknick died on Jan. 7, 2021 after being hospitalized following the events at the Capitol. Sicknick reportedly suffered two strokes and died of natural causes, according to the District of Columbia's Office of the Chief Medical Examiner. In response, the Capitol Police issued a statement saying that the finding "does not change the fact Officer Sicknick died in the line of duty, courageously defending Congress and the Capitol."

Howard Liebengood was a Capitol Police officer who died just days after protecting the Capitol during the insurrection. Liebengood spent 15 years as a member of the Capitol Police. The cause of his death was ruled to be suicide, according to a statement from representatives for his family.

Jeffrey L. Smith was a Metropolitan Police Department Officer who died by suicide following the events of Jan 6. Smith was injured by the mob of rioters while defending the Capitol, suffering head injuries, according to the White House.

Harry Dunn is a Capitol Police officer who was on duty during the attack on the Capitol. Dunn testified in front of the House committee that rioters directed racist slurs at him while he was on duty. Dunn has been a member of the Capitol Police for over 15 years, according to the White House.

Caroline Edwards is a Capitol Police officer who suffered a traumatic brain injury defending the Capitol grounds on Jan. 6. Edwards was the first member of law enforcement to be injured during the attack, according to the House committee.

In live testimony to the panel, Edwards offered vivid and sobering details from the day. "I saw friends with blood all over their faces, I was slipping in people's blood. I was catching people as they fell. It was carnage, it was chaos. I can't even describe what I saw," she said.

Aquilino Gonell is a Capitol Police sergeant who also was on duty that day and suffered injuries as a result of the violence. "I could feel myself losing oxygen and recall thinking to myself, 'This is how I'm going to die, trampled defending this entrance,' " Gonell told the House committee during a live hearing. Gonell is a U.S. army veteran, having served in Iraq. He is an emigrant from the Dominican Republic.

Eugene Goodman is a Capitol Police officer who fought off rioters a short distance away from the Senate chamber on Jan. 6. Footage from the day shows Goodman distracting rioters and leading them away from the chamber. Additional video releasedafter the insurrection shows Goodman seeing Sen. Mitt Romney, R-Utah, in the hallway and directing him in the opposite direction of the approaching rioters.

Goodman, who's also a U.S. Army veteran, received the Congressional Gold Medal for his service on Jan. 6. Following the insurrection, Goodman served as Acting Deputy Sergeant at Arms of the U.S. Senate from late Jan. through early March of 2021.

Daniel Hodges is a Metropolitan Police Department Officer who was also violently attacked by rioters, including getting crushed between doors within the building.

"I had conspiracy theorists and everyone you could think of yelling at me, saying, 'Why are you doing this, you're the traitor,' " Hodges told WAMU in the days following the insurrection. "We're not the traitors. We're the ones who saved Congress that day, and we'll do it as many times as necessary."

Jocelyn Benson oversaw Michigan's election system as secretary of state during the 2020 election. In the aftermath of the race, Benson received death threats over her continued backing of the results, and in December 2021, dozens of armed individualsprotested outside her home over the issue. Since then, Benson won reelection last November, beating Republican Kristina Karamo, who parroted false claims that the 2020 election was fraudulent.

Rusty Bowers previously served as the speaker of the Arizona state House. Bowers, a Republican, testified publiclyin front of the House committee investigating Jan. 6 that Trump and his aides pressured him to recall the Arizona electors and investigate the results without cause. Bowers refused calls from Trump and stood by the state results.

Shaye Moss is a former elections worker in Fulton County, Ga. Moss and her colleagues were targets of a conspiracy theory, amplified by the former president and his lawyer Rudy Giuliani, alleging fraudulent activity related to ballot processing. Moss received violent threats because of the false claims, which led her to go into hiding and leave her job. She testified publicly during one of the live hearings held by the Jan. 6 committee that the harassment turned her life "upside down."

Ruby Freeman was an election worker in Fulton County during the 2020 election. Freeman, who is the mother of Shaye Moss, said she was also harassed as a result of false claims pushed by Trump and Giuliani. Freeman cooperated with the House committee investigation, and parts of her testimony were broadcast during the hearing where Moss.

Al Schmidt served as Philadelphia city commissioner during the 2020 election. Following the election, Schmidt, a Republican, receiveddeath threats and online harassment because he oversaw the city's race results. He also publicly testified during the House committee hearings.

Schmidt was recently chosen by Democratic Gov.-elect Josh Shapiro to serve as the state's secretary of the commonwealth. 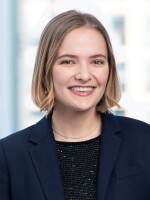 Elena Moore
Elena Moore is a production assistant for the NPR Politics Podcast. She also fills in as a reporter for the NewsDesk. Moore previously worked as a production assistant for Morning Edition. During the 2020 presidential campaign, she worked for the Washington Desk as an editorial assistant, doing both research and reporting. Before coming to NPR, Moore worked at NBC News. She is a graduate of The George Washington University in Washington, D.C., and is originally and proudly from Brooklyn, N.Y.
Sign up for our newsletters!
Keep up with all the latest news, arts and culture, and TV highlights from KPBS.
LATEST IN PODCASTS
LATEST IN EVENTS
LATEST IN TV HIGHLIGHTS
More News