Three years ago this month, Crichton, the 6-foot-9-inch genius M.D. who never practiced medicine but instead went into the novel-writing and movie- and TV show-making business, died from cancer at the age of 66. He left behind an unfinished techno-thriller, which the superb science writer Richard Preston took on the job of completing. The book will be appearing in stores within just a few days, an event which other Crichton admirers should look forward to with great anticipation.

They won't be disappointed.

Crichton set Micro on the island of Oahu, where a money- and power-mad science entrepreneur named Vin Drake has established a nanotechnology firm (nanotechnology being that branch of technology that manipulates microscopic molecules to construct tiny machines). A team of diverse and gifted young science graduate students from Boston travels to Hawaii to work for Drake's company and almost immediately on arrival gets caught up in a plot that involves deception, murder, mad science and corporate greed. And as a result of an extraordinary nanotech invention that Drake turns against them, the young scientists get shrunk to a size smaller than ants. In this reduced state, off they go on the lam into the island, as the sociopathic Drake tries to find them and stamp them out.

With his 2002 novel Prey, Crichton gave us another nanotech thriller in which tiny machines attack human beings. Over five decades ago, the wonderful novelist Richard Matheson, now in his 80s and still writing, published a nano thriller called The Shrinking Man. And who can forget enjoying the special effects in the movies Fantastic Voyage and Honey, I Shrunk the Kids?

But Crichton and Preston know the science better than anyone else, so the suddenly giant (from the new perspective of the desperately scrambling students) insects and plants, spiders and moths, bees, wasps and ants come to life much larger than life, and technically become the most accurate and vividly described menaces in recent science fiction. So, to shrink this review to as few words as possible, Micro is yet another terrifically entertaining Crichton thriller and — thanks to Richard Preston — we're lucky to have it.

An earlier version of this review suggested that this posthumous novel would be Michael Crichton's last. But apparently the door is still open. According to his publisher, there are "indications that there may be other books" Crichton was working on at the time of his death.
National 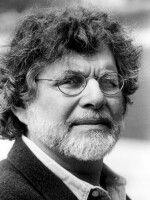 Alan Cheuse
Alan Cheuse died on July 31, 2015. He had been in a car accident in California earlier in the month. He was 75. Listen to NPR Special Correspondent Susan Stamburg's retrospective on his life and career.
Sign up for our newsletters!
Keep up with all the latest news, arts and culture, and TV highlights from KPBS.
LATEST IN PODCASTS
LATEST IN EVENTS
LATEST IN TV HIGHLIGHTS
More News