In considering Thor: Love and Thunder, the fourth film in the franchise centered on the Marvel Cinematic Universe's pompous, pumped-up thunder god, it's useful to cast your mind back to 2017's Thor: Ragnarok, its immediate predecessor.

That film broke a mold that ached to be broken — the two previous Thor movies, namely, both of which came so weighted down with unearned faux-gravitas they had people reconsidering their takes on Iron Man 2. (To be clear: Thor was better than Iron Man 2, but its sequel, Thor: The Dark World, stalwartly remains the MCU's lowest point.)

But with Ragnarok, the dark (and fusty) world of the Thor franchise burst with new light and color and humor. Credit director Taika Waititi, who enlivened the proceedings with a looseness that allowed rock-operatic set-pieces in which the banging of heads was accompanied by head-banging anthems to coexist with muttered, underplayed, often improvised comic dialogue.

It was an odd, idiosyncratic fuel mixture — cinema as airbrushed van art — but it worked.

The good news, in re: Love and Thunder: Waititi is back, and he's determined not to reinvent the wheel.

The bad news: The wheel's tire-treads are looking worn.

Thor: Love and Thunder plays like a Ragnarok remix, for good and ill. For a villain, swap out Cate Blanchett's goth drag queen Hela for Christian Bale's creepy Gorr the God Butcher, whose title pretty much lays out his entire schtick: A god ignored Gorr's pleas to save the life of his daughter, so, armed with a god-smiting sword, Gorr sets out to slay the gods of every pantheon.

Thor: Love and Thunder plays like a Ragnarok remix, for good and ill.

He's evidently going alphabetically, because Asgardians are next on his list. RIP, Abyssinians.

(Quick side note: If you find this bit confusing, because all this time you thought that the MCU had established that Asgardians weren't actual gods, just an advanced alien race that people of Earth mistook for deities, sit down here by me.)

Bale is one of the best parts about Love and Thunder, bringing soulful malice where Blanchette brought sneering camp.

For a muscle-bound pal to bicker and bash heads with, trade Mark Ruffalo's Hulk for Natalie Portman's Mighty Thor, who's taken up O.G. Thor's hammer Mjolnir ... and his arm routine. It's been a minute since we've had a chance to see Portman get to goof around a bit, and "goof around a bit" is this film's entire mission statement.

And for a trusty sidekick, trade out Korg, the chill rock-creature voiced by Waititi, for ... more Korg.

Which is the whole problem. Thor: Love and Thunder feels like the product of a Thor: Ragnarok focus group. We get more of what audiences liked about Ragnarok — jokes, tunes, the Korg of it all — but what once seemed bracing and revelatory now feels familiar, safe, even rote on occasion.

The charming breeziness of the previous film is replaced here with an dutiful assiduousness. Boxes to be checked. The jokes land — but, particularly in the early going, they do so in a way that feels effortful, sweaty.

But ... so what? "This movie is too much like that other movie I liked!" is not an oft-heard complaint among filmgoers, after all. And certainly there is a lulling sense of comfort in having one's set of expectations so precisely met, and in the times we find ourselves in, comfort is at a premium.

Oh, and also: For Marvel Comics nerds, a cameo appearance by a certain Marvel Universe fixture who is [writer pauses to consult his copy of The Official Handbook of the Marvel Universe] "an ethereal being, as much abstract concept as actual entity, who exists as the sum total of all living things in the universe" is a pretty neat trick.

A previous version of this story referred to Jeff Goldblum's character in Thor: Ragnarok as Taskmaster instead of Grandmaster.
National 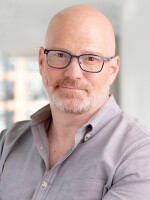 Glen Weldon
Glen Weldon is a host of NPR's Pop Culture Happy Hour podcast. He reviews books, movies, comics and more for the NPR Arts Desk.
Sign up for our newsletters!
Keep up with all the latest news, arts and culture, and TV highlights from KPBS.
LATEST IN PODCASTS
LATEST IN EVENTS
LATEST IN TV HIGHLIGHTS
More News