Out in the world, when people talk about the shootings at Kent State University on May 4, 1970, they call it "Kent State." But in the small town of Kent, 35 miles south of Cleveland, and on the university campus, they call it "May 4th."

It was 40 years ago Tuesday that the shootings -- which killed four people and wounded nine others -- stunned the nation. Even at the height of the Vietnam War protests, no one imagined that government soldiers would fire real bullets at unarmed college students.

"I saw the smoke come out of the weapons, and light is faster than sound, and so I knew immediately [they] were not firing blanks. So it was almost instinctive to dive for cover," remembers Jerry Lewis, who was 33 and teaching sociology at Kent State in 1970.

Often, at tense times, Lewis served as a faculty marshal. He had some Army training and was worried about bayonet attacks and butt strokes with M-1 rifles. He hadn't thought about live fire.

Lewis says that when he takes people to the scene of the shooting on the Kent Commons, he likes to point out a particular mark -- a perfectly round bullet hole in a steel sculpture.

"This is what an M-1 bullet, .30-caliber bullet, does to steel," he says. "And the artist, to his credit, has refused to fix this. So, ironically, the [National] Guard created their own memorial."

Shots rang out for 13 seconds that day, killing Jeffrey Glenn Miller, Allison Krause, William Knox Schroeder and Sandra Lee Scheuer. More than 60 shots came from 28 guardsmen. Some fired into the ground; some fired high on purpose.

The students had gathered for an anti-war rally, and the Guard command had wanted them to go away. Tear gas was fired, and then the canisters flung back. The youths gathered were screaming insults, giving the guardsmen the finger. Rocks were thrown.

Then a group of guardsmen moved in formation to the top of a small hill. Some of them turned in unison, aimed and fired. They could have just kept going over the hill. Most of the students were in a parking lot downhill, more than 100 yards away.

For Lewis, after 40 years, that is still the question: Why did the Guard start shooting?

'The Worst Type Of People'

"Obviously, if you turn together in close quarters with bayonet, there must be some coordination, but I've always interpreted as that they planned to fire but fire high -- because they were angry ... they were poorly led ... their tear gas masks didn't work properly," Lewis says. "But many people have used the turning together -- and there were lots of eyewitnesses to that -- as [a sign] that there was a rough agreement to do that, or that there was an order. But I haven't seen any evidence yet that there was an order."

The issue for the students that day became soldiers on their campus.

The noontime rally had been scheduled to protest President Nixon's plan to expand the Vietnam War into Cambodia. That news came the previous Thursday. On Friday night, there was trouble, spilling out of the downtown bars. By Saturday night, when the campus ROTC building was set on fire, the National Guard was already on the way.

Ohio's governor, James Rhodes, a Republican running a law-and-order campaign for the U.S. Senate, was in town on Sunday morning. He was critical of the radicals traveling the country causing trouble.

"They're worse than the brownshirts and the communist element and also the night riders and vigilantes," Rhodes said. "They're the worst type of people that we harbor in America. And I want to say this: They're not going to take over a campus."

"The first card that I opened up in the intensive care unit was a very nice-looking card," recalls Dean Kahler, who was paralyzed during the shooting. "But the note in it said, 'Dear communist hippie radical, I hope by the time you read this, you are dead.' "

Kahler was a freshman at Kent State in 1970. He was from a farm family and wanted to be a coach. He was against the war, but on that day, he was mostly curious -- about the Guard, about his rights.

When Kahler heard the shots, he lay on the ground. Then he was hit in the back. He has been in a wheelchair for the past 40 years.

After he graduated and became a history teacher, he would tell his high school students, "Go home and ask your parents about Kent State."

The first card that I opened up in the intensive care unit was a very nice-looking card ... but the note in it said, 'Dear communist hippie radical, I hope by the time you read this, you are dead.'

Many of the reactions were positive and supportive. Sometimes, a youngster would tell Kahler it was a bad idea: "They told me not to talk to you about it," the students would say.

"I said, 'Well, you know, I'm teaching American history, so we're going to touch on it,' " Kahler recalls. " 'If you need to be removed from my room and go to another teacher to talk about it, go see the principal and the guidance counselor immediately.' "

As the 40th anniversary of the shootings approaches, the Kent student TV station has had stories to cover all over campus.

For Heather VacLav and Eric Snitil, two students who work at the station, the events of May 4, 1970, meant "not much" when it came to choosing a school. They were impressed with Kent State's academic reputation.

Snitil says he came for the broadcast journalism program -- "it's one of the best in the country."

And VacLav believes the university has turned around what is kind of "Kent State's claim to fame" by being open and creating a memorial.

"The original May 4 was very sad and tragic," she says. "I think now, looking back at it, the university's kind of just taken something that was negative and tried to turn it into something positive."

On Monday night, students, faculty, family and friends will honor the four who were slain and the nine who were wounded four decades ago with a candlelight march and a silent vigil. 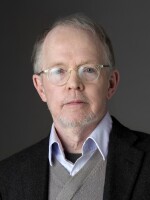 Noah Adams
Noah Adams, long-time co-host of NPR's All Things Considered, brings more than three decades of radio experience to his current job as a contributing correspondent for NPR's National Desk., focusing on the low-wage workforce, farm issues, and the Katrina aftermath. Now based in Ohio, he travels extensively for his reporting assignments, a position he's held since 2003.
Sign up for our newsletters!
Keep up with all the latest news, arts and culture, and TV highlights from KPBS.
LATEST IN PODCASTS
LATEST IN EVENTS
LATEST IN TV HIGHLIGHTS
Election 2022: Live results
Explore all national, state and local returns now.
See results →
More News