With less than three weeks to go before his self-imposed deadline to nominate a new Supreme Court Justice to replace the retiring Stephen Breyer, President Biden huddled Thursday evening with Democrats on the Senate Judiciary Committee.

It's the latest in a series of meetings and phone calls Biden has held with senators from both parties to discuss the pick, who he has promised will be the first Black woman nominated to the court.

Illinois Sen. Dick Durbin, who chairs the committee, said the 10 lawmakers in the meeting shared some recommendations with Biden. "But mainly the message was, 'We trust your judgement, Joe Biden, when it comes to choosing the right person,'" Durbin told reporters at the White House.

"We are all excited about the candidates we have heard about," Sen. Sheldon Whitehouse of Rhode Island added. "We all have enormous confidence in President Biden's judgement. We are very aware of the historic nature of this appointment, and very proud of that."

President Biden on his search for a Supreme Court nominee:

Biden tells @LesterHoltNBC that he’s done a deep dive on “about four people,” and thinks his pick will get a vote from Republicans

Biden says he's looking for someone "with the same kind of capacity" as Justice Breyer pic.twitter.com/pNYLrLVSBR

Rep. James Clyburn, a close Biden ally who helped the president turn his 2020 campaign around with a key endorsement before the South Carolina primary, has been advocating for Judge J. Michelle Childs, as well.

In an interview with NBC News taped shortly before his meeting with Democratic senators, Biden indicated he was already narrowing down the list of contenders.

"I've taken about four people and done the deep dive on them," Biden told the network.

Pressed whether the conversation with Biden focused on four candidates — or a larger or smaller pool of contenders — Durbin and the other Democrats declined to comment. Durbin did say, though, that Biden told the lawmakers he hopes to begin interviewing nominees "soon."

As the reviewing and winnowing happens behind closed doors, the most public aspect of Biden's nomination process has been a series of meetings and phone calls with senators.

The aggressive courting seems, at first glance, to fly in the face of Biden's recent vow to be less of a "president-senator," as he put it.

In the weeks since Breyer announced his retirement, Biden has repeatedly emphasized how much he wants to respect the Senate's constitutional role of "advice and consent" on nominations. Biden went as far to discuss his upcoming pick with Senate Minority Leader Mitch McConnell, who famously blocked Obama nominee Merrick Garland's 2016 bid from ever coming to a vote, then pushed Justice Amy Coney Barrett's nomination through in the closing days of the 2020 presidential campaign.

Biden also met with Durbin and Republican Chuck Grassley, the ranking Republican on the Judiciary Committee, in the Oval Office. Biden and White House officials have continued to have conversations with lawmakers from both parties this week.

"Being a former chairman of the Senate Judiciary Committee, the president has a unique understanding of the importance of these decisions, and of the 'advice' role of the Senate," White House spokesman Andrew Bates said.

"He looks forward to speaking with more Democrats and Republicans, in addition to consultations with a range of diverse legal experts and scholars," Bates said.

One indication of how much Biden has been thinking about his long tenure overseeing Supreme Court nominations as the Judiciary Committee chairman: Biden told Durbin and Grassley that he had recently spent time reviewing his own opening statements from decades-old confirmation hearings.

Psaki argued Biden's meetings and calls with lawmakers don't mark an immediate departure from that vow to stay away from being the "president-senator."

"I think what he was referring to in those comments was hours and hours and hours of endless closed-door meetings, as it related to negotiating through the course of the fall," Psaki said. "But this is an opening on the Supreme Court, which is a lifetime appointment. Which is something the president takes very seriously."

Biden was the top Democrat on the Judiciary Committee for decades, and oversaw confirmations for several justices, including Breyer. He's boasted in recent weeks that he probably has more experience with court nominations than any other president.

When Biden looks back on his time in the Senate, he often waxes nostalgic about working with Republican colleagues. It's something he singled out about Breyer's time as a Judiciary Committee lawyer when the justice announced his retirement.

"He was famous for biking across Washington, virtually every day, for a face-to-face meeting with a Republican chief counsel, the ranking Republican counsel. And over breakfast they would discuss what they would do for the country together. Because in those days we tried to do things together," Biden said.

"There's never really been a long period of time where this has not had at least some controversy around it," she said.

While Biden oversaw smooth, bipartisan confirmations for justices like Breyer, he also chaired some of the most contentious hearings in recent memory: the Clarence Thomas confirmation, rocked by Anita Hill's sexual harassment allegations, and the 1987 Robert Bork confirmation that Biden helped scuttle by focusing on how Bork viewed privacy rights.

Ringhand said three main factors go into how contentious a confirmation is: the overall political mood of the country, whether the same party controls the White House and Senate, and whether the new justice would flip the balance of the court.

Despite the intense partisanship of today's Senate, the fact that Biden's nominee won't shift the ideological tilt of the court could bode for a less fractious fight.

Brian Fallon has often criticized Democrats for not being sharp-elbowed enough on court confirmations. But given the factors at play this time around, the executive director of Demand Justice said he doesn't see any harm for Biden to spend time courting Republicans.

"There's a difference between the vast majority of Republicans voting no on this pick, and them going on a total war footing on this nomination fight," Fallon said, adding that he also views Biden's Republican outreach as a way to soothe concerns of more moderate Democrats.

"As long as in their internal planning sessions they're fully coming to grips with the likelihood that most of the Senate Republicans are probably use the setting of the confirmation hearings to grandstand and oppose whoever he picks – as long as they're clear-eyed about that – I don't think there's any harm in doing any outreach," Fallon added.

Speaking to NBC on Thursday, Biden said he's still hoping to win some Republican votes for his eventual pick.

"I think whomever I pick will get a vote from the Republicans," Biden said. "I'm not looking to make an ideological choice. I'm looking for someone to replace Judge Breyer with the same kind of capacity Judge Breyer had: with an open mind." 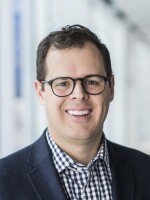 Scott Detrow
Scott Detrow is a White House correspondent for NPR and co-hosts the NPR Politics Podcast.
Sign up for our newsletters!
Keep up with all the latest news, arts and culture, and TV highlights from KPBS.
LATEST IN PODCASTS
LATEST IN EVENTS
LATEST IN TV HIGHLIGHTS
More News