An 18-year-old Indiana University student was stabbed multiple times in the head while riding a local bus in Bloomington, Ind., this past week.

The suspect told police she stabbed the victim because the victim was "Chinese," adding that it "would be one less person to blow up our country," according to an affidavit shared with NPR.

Indiana University in Bloomington confirmed that the victim was a student enrolled there and said it was an incident of "anti-Asian hate." Police did not provide details about the victim except that she was from Carmel, a city north of Indianapolis.

Bloomington is a college city southwest of Indianapolis. About 10% of the city's population identifies as Asian, according to the U.S. Census Bureau.

The suspect, Billie R. Davis, 56, has been charged with attempted murder, aggravated battery and battery with a deadly weapon, according to court documents.

Since the attack, Asian American students and staff at Indiana University have been grappling with grief, anger, anxiety, and fear, according to Melanie Castillo-Cullather, the director of the school's Asian Culture Center.

"This has been a very traumatic experience for our Asian community," Castillo-Cullather told NPR. "We will never forget this."

The attack was unprovoked, police said

Local police said surveillance footage from the Bloomington Transit bus showed that the suspect and the victim had no interactions prior to the assault. The victim appeared to be getting off the bus when another passenger struck her repeatedly in the head with a knife, according to the affidavit. The attacker then left the bus and walked away.

When emergency responders arrived on scene, the victim was in immediate pain and bleeding, police said. She was quickly transported to an area hospital, where it was determined that the bleeding came from stab wounds on her head.

Police said they were able to identify and track down the suspect with the help of an unnamed witness who followed Davis out of the bus after the attack and alerted law enforcement of the suspect's location.

Local prosecutors told NPR that Davis has not been charged with a hate crime because Indiana is one of four states that lack a comprehensive law.

But David Goldenberg, the Midwest regional director of the Anti-Defamation League, said the lack of comprehensive hate crime laws in Indiana is concerning.

"Prosecutors need to prosecute these incidents as hate crimes when they are," Goldenberg told NPR. "The thing about hate crimes is it affects not only the individual victim but it affects the entire community."

Indiana University sophomore Katelyn Wo says she trembled when she heard the news of the attack because she often passes by the same bus route where the it took place.

"It's a really scary reminder for me that I need to be more vigilant of myself and where I am whenever I'm taking the bus or walking out into the community," Wo told NPR.

Though she feels safe on school grounds, Wo admits to feeling like a "perpetual foreigner" when she and her Asian American friends would venture off campus.

The attack only renewed those fears, Wo said, adding that she and her friends have begun routine check-ins and offering car rides to avoid traveling alone.

Castillo-Cullather, from the school's Asian Culture Center, said Wo is not the only one.

"Students have been subject to heckling encounters on the street, stares and racist jokes," she said. "So it's important for the larger community to not dismiss this as an isolated incident but part of a bigger issue around anti-Asian hate."

Asian Americans in Indiana have felt threatened before

In 2016, an 18-year-old student, Yue Zhang, was attackedwith a hatchet by a man who wanted to bring about "an ethnic cleansing" in Nashville, Ind. In 1999, graduate student Won Joon Yoon was shotto death outside a church by a self-proclaimed white supremacist.

The unprovoked assault against a person of Asian descent also follows increased reports of hate crimes against Asians in the U.S. beginning in 2020.

"Our initial reaction is just frustration that we have to do the things we've done over and over again, which is issue statements, respond to a grieving community and continue to state what we said for a really long time," Borja told NPR.

Bloomington Mayor John Hamilton said his staff is working to support the victim and the local Asian community, describing the attack as a "racially motivated incident."

"I want to state categorically that here in the city of Bloomington we deplore any form of racism and discrimination, especially hate based violence," he said in a statement released on Saturday.

Indiana University's vice president for diversity, equity and multicultural affairs, James Wimbush, also saidthe attack "sadly reminded that anti-Asian hate is real and can have painful impacts on individuals and our community." 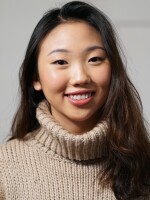