Are the remains at the heart of a new documentary those of Jesus, Mary Magdalene and their child?

The documentary suggests yes, but many scholars say it's doubtful.

James Cameron, the director of Titanic, who has produced the documentary The Lost Tomb of Jesus, promoted his film in a New York press conference Monday.

On the stage at the New York public library where the news conference was held were two small bone boxes, or ossuaries, covered with a cloth, and a panel, including religious scholars, an archeologist and a statistician.

Cameron said he had never doubted the historical reality of Jesus:

"But the simple fact is there has never been a shred of physical, archeological evidence to support that fact until right now," he said.

The tomb was discovered in 1980, in Jerusalem, several miles outside the Old City. There were scholarly articles about it in the late '90s. Six of the ossuaries had inscriptions recorded and catalogued. The inscriptions included "Jesus, son of Joseph," two different Marys, and "Judah, son of Jesus."

Simcha Jacobovici, the director of the film, says the tomb was not really studied for 16 years, because these are common names, so it was thought unimportant.

But Jacobovichi says that there was another name that had not really been noticed that was on the ossuary of one of the Marys. It was what many scholars know as Mary Magdalene's real name — Mariamne — a Greek version of the Hebrew name Miriam. And next to it was the word "mara."

"Mara is a Greek rendering of an Aramaic word which means master, a teacher, an apostle," he said. So right there on the ossuary was evidence supporting what readers of the novel The Da Vinci Code thought was fiction, he asserted.

And Jacabovici noted that later Gospels, The Acts of Phillip and the Gospel of Mary Magdalene, called Mary Magdalene an apostle and teacher in her own right.

Laurence Stager, professor of the archeology of Israel at Harvard University, says most scholars believe the tomb of Jesus is underneath what is now the Church of the Holy Sepulchre in the Old City. The site with the ossuaries is several miles outside the Old City. He says the Acts of Phillip and the Gospel of Mary Magdalene were later Gospels — he doesn't think they are authoritative — and he questions all the claims.

"From what I know about it at this moment, it sounds rather preposterous," he said.

He said he'll wait until there is a vetted scholarly article in a reputable journal.

Since many scholars say the names inscribed on the ossuaries were common among Jews of that time, Jacobovichi and Cameron brought in a statistician who said the grouping of these names together has a probability of 600-1.

Other scholars say the names are not clear and that ancient Semitic script is difficult to decipher.

Archeologist Amos Kloner, who described the tomb more than 10 years ago as the burial cave of a well-off family, says there are 900 such burial caves within several miles of the Old City of Jerusalem, that the name Jesus was found 71 times. The name Judah son of Jesus was also found.

The documentary debuts on the Discovery Channel Sunday, March 4. 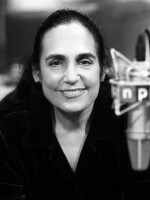 Margot Adler
Margot Adler died on July 28, 2014 at her home in New York City. She was 68 and had been battling cancer. Listen to NPR Correspondent David Folkenflik's retrospective on her life and career
Sign up for our newsletters!
Keep up with all the latest news, arts and culture, and TV highlights from KPBS.
LATEST IN PODCASTS
LATEST IN EVENTS
LATEST IN TV HIGHLIGHTS
More News